Fungi in the Gut Prime Immunity Against Infection 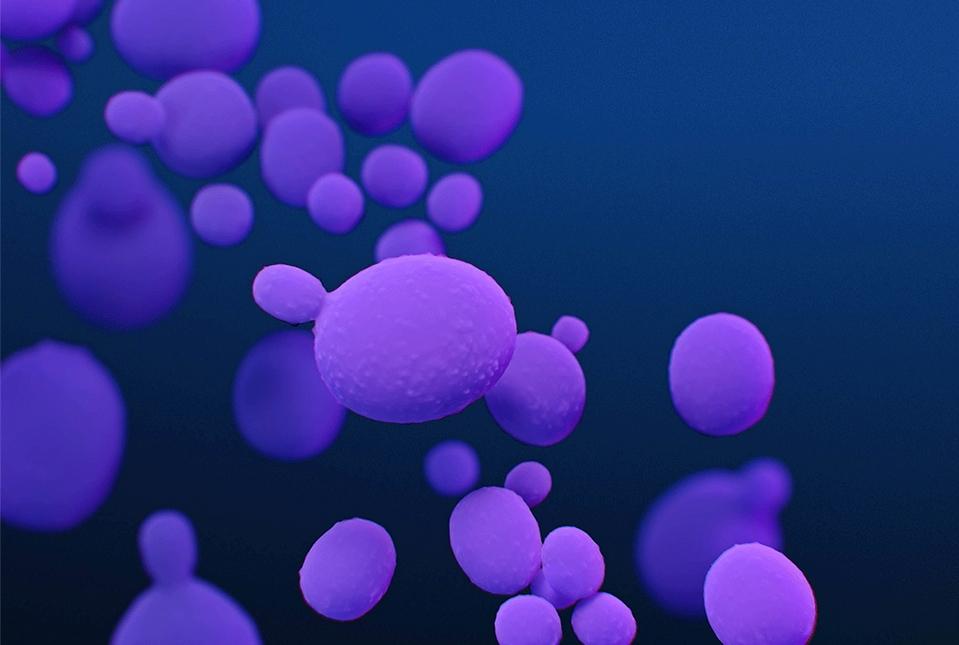 Fungi in the healthy gut stimulate production of antibodies against more pathogenic species, such as Candida albicans and Candida auris (above), major causes of fungal disease in immunosuppressed patients and the elderly. Image credit: Stephanie Rossow, CDC

Common fungi, often present in the gut, teach the immune system how to respond to their more dangerous relatives, according to new research from scientists at Weill Cornell Medicine. Breakdowns in this process can leave people susceptible to deadly fungal infections.

The study, published Feb. 5 in Cell, reveals a new twist in the complex relationship between humans and their associated microbes, and points the way toward novel therapies that could help combat a rising tide of drug-resistant pathogens.

The new discovery stemmed from work on inflammatory bowel disease, which often causes patients to carry larger than normal populations of fungi in their guts. These patients often develop strong antibody responses against mannan, a molecule common to a wide range of fungal species. However, Dr. Iliyan Iliev, associate professor of immunology in medicine in the Division of Gastroenterology and Hepatology at Weill Cornell Medicine, noticed that healthy controls in these studies also had some level of anti-fungal antibodies. "There was no actual evidence for fungal infections in the healthy individuals that we examined, so we started thinking about the possible function of those antibodies," said Dr. Iliev, who is senior author on the study and a member of the Jill Roberts Institute for Research in Inflammatory Bowel Disease.

The team developed a platform that allowed them to determine which gut fungi are targeted by antibodies in the blood of individual patients. They detected a strong response against the yeast Candida albicans. Turning to experiments in mice, Dr. Iliev and Itai Doron, a Weill Cornell Medicine Graduate School of Medical Sciences doctoral candidate in the lab and lead author on the study, found that colonizing the animals' guts with Candida albicans caused them to develop antibodies against the fungus in their bloodstreams, even though they didn't develop blood-borne fungal infections. Instead, the animals' immune cells appeared to transport fungal antigens to the spleen, stimulating the production of circulating antibodies in the bloodstream. "Those fungi just educate that immune response," Dr. Iliev said.

In patients with suppressed immune systems, such as organ transplant recipients and some cancer patients, fungi in the gut can invade the bloodstream and cause life-threatening infections. Dr. Iliev and his colleagues mimicked this process by treating mice with immunosuppressive drugs. When a Candida species colonizes the gut of these mice, the fungus moves into the bloodstream, causing a fatal infection. Treating the mice with purified anti-fungal antibodies from donor animals protected the immunosuppressed mice from these infections. The same strategy worked against infection with either Candida albicans or the emerging pathogenic yeast Candida auris, which has become a major cause of fungal disease in immunosuppressed patients and the elderly in recent years. To read more, click here. 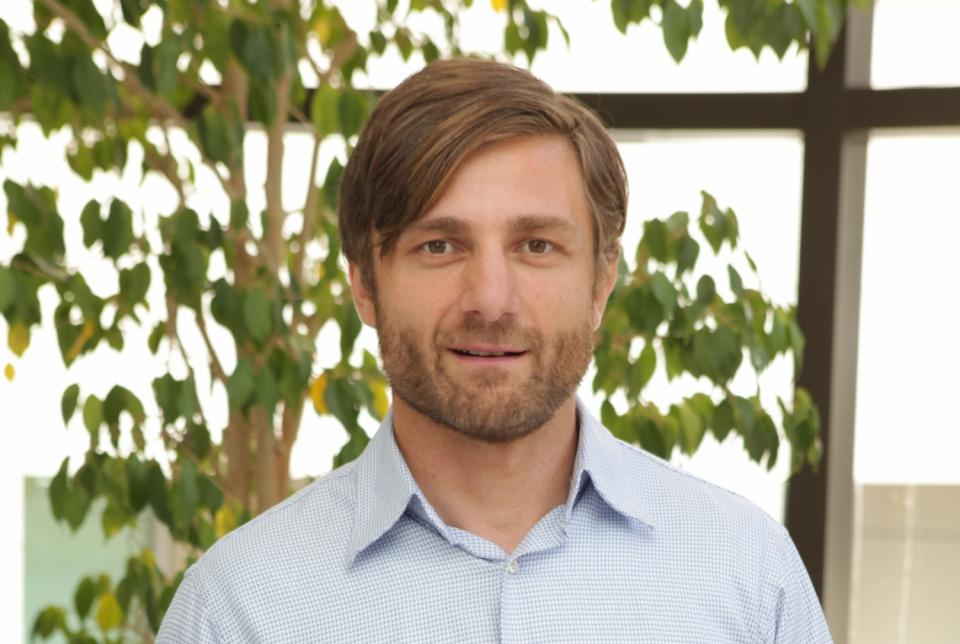 Dr. Iliyan Iliev, an associate professor of immunology in medicine in the Division of Gastroenterology and Hepatology and a scientist in the Jill Roberts Institute for Research in Inflammatory Bowel Disease at Weill Cornell Medicine, has been awarded the Investigators in the Pathogenesis of Infectious Disease (PATH) award by the Burroughs Wellcome Fund.

The PATH award provides early-career scientists with $500,000 over five years to investigate the interplay between humans and pathogens, and how such encounters can lead to disease. These prestigious awards are intended to give the freedom and flexibility to pursue new avenues of inquiry, stimulating higher risk research projects that hold potential for significantly advancing understanding of how infectious diseases work and how health is maintained.

“This award is not only a great recognition, but it’s also a trust that the Burroughs Wellcome Fund has in us to go in a direction that we haven’t yet explored in our lab,” Dr. Iliev said.

The PATH award will allow Dr. Iliev to explore processes that allow fungi to breach intestinal barriers and cause systemic Candidiasis, which is the most common type of systemic fungal infection caused by a yeast called Candida albicans that is found in humans. To read more, click here. 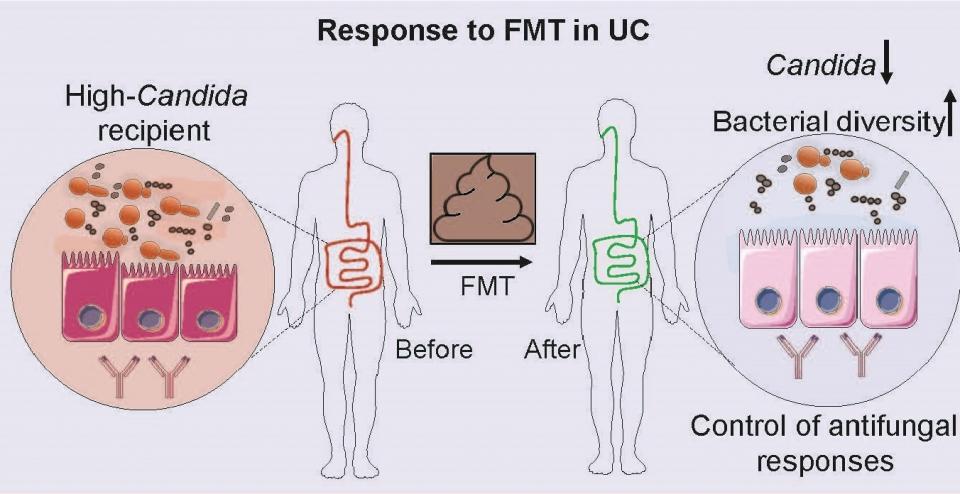 Higher levels of a type of fungus in the gut are associated with better outcomes for patients with a type of inflammatory bowel disease called ulcerative colitis who are treated with gut microbes from healthy donors, according to a new study by Weill Cornell Medicine investigators.

The study, published April 15 in Cell Host & Microbe, suggests a way to determine which patients may be good candidates for the therapy, called fecal microbiota transplant (FMT), in which stool—and the healthy bacteria, fungi and other microbes it contains—are transferred from a donor to the patient.

Ulcerative colitis is a type of inflammatory bowel disease that causes chronic sores and inflammation in the colon and rectum. Prior research has shown that FMT can promote healing in the mucosal lining of the lower digestive tract, relieving ulcerative colitis symptoms in some people. Based on the new study, those patients who benefit from this therapy have higher levels of the fungus Candida in their gut prior to the procedure.

“The fecal transplant then acts to decrease the population of Candida,” said senior study author Dr. Iliyan D. Iliev, assistant professor of immunology in medicine in the Division of Gastroenterology and Hepatology and co-director of the Microbiome Core Lab at the Jill Roberts Institute for Research in Inflammatory Bowel Disease at Weill Cornell Medicine. While more research is needed, the decline in Candida after FMT may help to reduce inflammation in the colon and rectum. “Altered fungus levels may also affect bacteria in the gut, altogether reducing inflammation,” said Dr. Irina Leonardi, first author of the study and a postdoctoral associate in medicine at Weill Cornell Medicine.

About 750,000 people in North America have ulcerative colitis. The disease does not always respond to medication, and while surgery can relieve symptoms, it is not curative. The current research may one day help doctors determine which patients might be candidates for FMT or other microbiome-based therapies. to read more, click here.